If you just arrived here - this blog has now moved to the bigger and better looking creative portfolio website www.nadiagativa.com 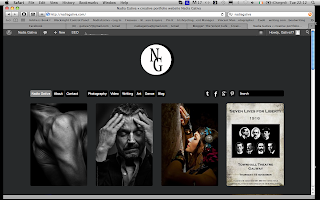 If features all the things I like to do (photography, dance, writing, visual art), inspirational quotes from people I admire, plus a blog section with some of the post from here and some updates ones from 2013. 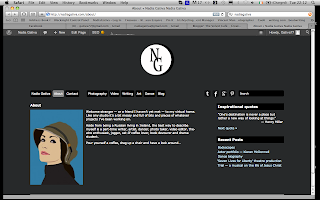 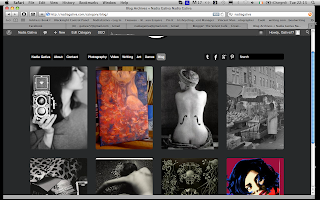 I'm finally moving my blog to a new (hopefully cosy and better updated) home on a self-hosted website... In a desperate decision to collect all the scraps of work, become horrified and quickly start working harder and producing more, I'm building www.nadiagativa.com

It's coming up very soon, promise... and I hope that all the lovely people who ever commented on my rare posts, written me emails of support and encouragement, or simply dropped by to have a look, will be at my virtual housewarming!
Posted by Nadia Gativa at 00:55 No comments:

Whilst having a cold...

While cycling fans watch a guy with ugly side-burns pick up his pre-paid yellow jumper at the TdF'12 on the sunlit streets of France, I'm battling a cold brought by the traditionally shitty rainy Irish summer.
The great thing is, even after years of living with a sports journalist, I'm still a person from a world where Armstrong is a jazz musician.


For this particular reason of being sick and lazy, I'm posting absolutely random flash fiction pieces...
On a second thought - writing a recent review on the Dublin Camera Club annual exhibition made me despair think of photography again. There is a lot I could have said that was left out of print, main thing being that talent, imagination and an 'eye' for beauty is not something that equipment, prizes and even experience can buy...


And with that final thought I'm sharing a website of one amazing dancer/photographer Alina Yanecheck. Not sure what I want more - to look like this girl or to shoot like she does.


The boy who lost an eye

It was awful, truly terrible. The eye was so round and big, there was no way you could loose it. But the boy was careless. He always lost things – his phone, his umbrella, even shoes. Now an eye. The eye was precious to him. It was new. It was the best thing he had ever since he lost another one a year before. That one was black and didn’t move at all. It didn’t flash red, yellow and green if you squeezed it hard. It didn’t bounce off the floor either. Now the boy has to wait till next Halloween to get one.

Katty is a sleepwalker. I only found out when she was a year old. There were no signs before; she always slept quietly at the foot of my bed in her blanket. One night I woke up in sweat from a strange noise in the kitchen. Nothing so small should be capable of making so much noise. There was spilt milk on the floor and the garden door was open. Katty was outside sitting on the bench. I went over and sat next to her. The garden was still and beautiful, drenched in moonlight. Katty’s green eyes were shining as she stared at something I couldn’t see. ‘Come here’, I called out to her and stretched my hand. She
climbed onto my lap, curled up and drifted into sleep. She purred gently as I stroked her ears.

The Devil appeared in Dublin yesterday

His name was Paddy or Jack, I can’t remember. I had a hangover. He was wearing a suit and a pink shirt. Feckin’ fag! He must have been a banker or a builder, one of those bastards who ruined us. I was just sitting on the bench by the Liffey, minding me own business, talking to me mate about a GAA match when this fairy strolled up. Has the poshest south sider accent, bloody eejit, and asked how to get to the National Gallery. How the fuck do I know? I’m not some artsy-fartsy pansy hipster. I wouldn’t give a shite if he was one of them immigrants, Polish or Chinese of wherever the fuck they come from taking away our jobs and screwing our women. But this guy was a feckin’ Dubliner. I was just telling me mate about me uncle’s funeral, the whole bleeding family of sixty five first cousins coming over from Kerry and the middle of nowhere to eat all the tea and ham sandwiches, when this woofter asked us where the shaggin’ museum was. ‘Feck off!’ I said. ‘Piss off to your side of the river.’ Fecking tie-wearing devils strolling around when Irish people are suffering from recession and can’t afford a bleedin’ pint on a Friday night!

Posted by Nadia Gativa at 18:04 No comments: